It’s Sunday and it’s Kempenfest, one of the largest arts and crafts festivals in North America, boasting over 350 exhibitors as well as antiques, food and music…which is where Tewit Band come in as they led off Sunday’s proceedings on the RBC’s Indie Stage.

It was a another blistering day; hats and sun screen strongly recommended but again there was a very appreciative crowd. 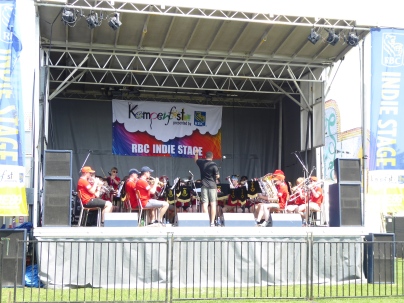 The Mayor of Barrie, Jeff Lehman, also came along to listen to the band and meet members for a chat during the interval. If we had known in advance we could have asked Mayor Jeff to join in; he plays drums with his own band ‘Sonic Coalition’. A quick search on Youtube will provide the evidence!

After the concert members of the Band added their pictures to the ‘Art in House project’ photo board; a graphic display of Downtown Barrie. The Flying Monkeys Craft Brewery seems to have been a popular location for Harrogate’s former mayor and consort Michael Newby and Clive Kirkham. 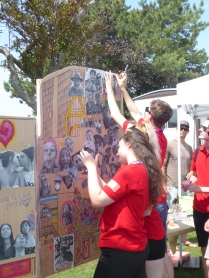 Once all the photos were in place everybody met under Barrie’s landmark sculpture for a group photo. The Spirit Catcher was originally created by sculptor Ron Baird for Expo 86 in Vancouver and installed in Barrie in 1987. It stands 25 m (70 ft) wide by 21 m (65 ft) tall. 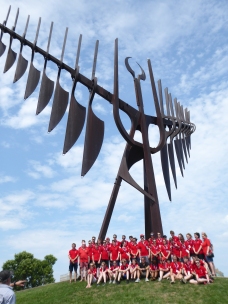 Monday saw Tewit on their travels again with two historic sites on the itinerary. First stop was Sainte-Marie among the Hurons, a reconstruction of a French Jesuit settlement built in 1639 in the land of the Wendat people. The French abandoned the settlement in 1649. 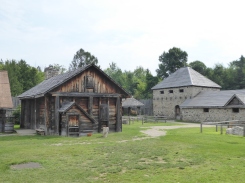 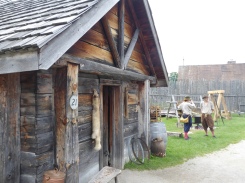 From Sainte-Marie among the Hurons we travelled on to Discovery Harbour and one of the Band’s more unusual concert venues. Discovery Harbour traces its roots back to the original British naval and military base in Penetanguishene, built to safeguard access to Upper Canada after the War of 1812. 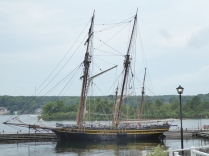 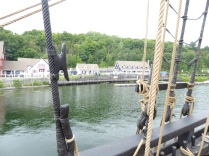 As rain was threatening the outdoor concert was moved indoors to the building that houses the hull of H.M.S. Tecumseh, reportedly sunk in 1828. 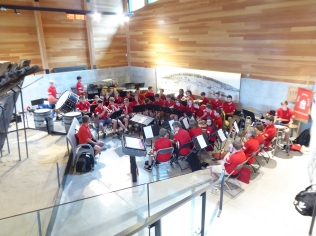 Following the performance there was just enough time for a kickabout before returning to Barrie. 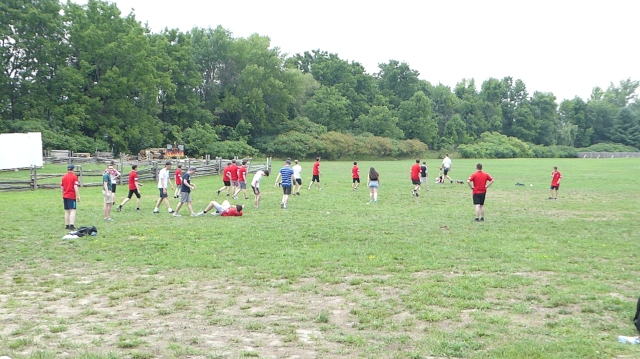