Wellington is named after Arthur Wellesley, the 1st Duke of Wellington. It is the capital city and second largest in New Zealand, with 418,500 residents. It is located at the south-western tip of the North Island, between Cook Strait and the Remutka mountain range. Wellington has a temperate, maritime climate, and is the world’s windiest city! 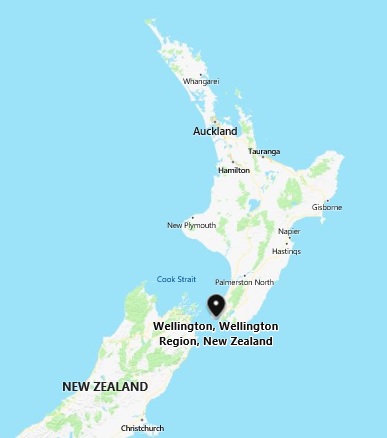 The nation’s capital since 1865, architectural highlights include the Government Building, one of the largest wooden buildings in the world, and the iconic Behive. Wellington is also home to several of the largest and oldest cultural institutions in the nation such the National Arhhives, the National Library, and the Museum of New Zealand. It plays host to many artistic and cultural organisations, including the New Zealand Symphony Orchestra and Royal New Zealand Ballet. It is regarded as one of the most ‘liveable’ cities world.

Wellington’s economy is primarily service-based, with an emphasis on finance, business services, and government. It is the centre of New Zealand’s film industry, and increasingly a hub for information technology and innovation.. Wellington is one of New Zealand’s chief seaports, and is served by Wellington International Airport. Transport network includes train and bus lines, which reach as far as the Kapiti Coast and Wairarapa, and ferries connect the city to the South Island.

Harrogate has an established link with Wellington, recognising the association between the two towns/cities from the Second World War.

New Zealand air force crew were based in and around Harrogate and flew bombing raids over Germany from local airfields such as Linton-on-Ouse and Dishforth.

Sadly, many sacrificed their lives and are buried in the Commonwealth Cemetery at Stonefall.

There is also a New Zealand garden within the Valley Gardens which also commemorates those who gave their lives during the war.

Harrogate’s link with Wellington is defined as being ‘an historic Sister City’.

We are keen to develop this and, in association with Sir Thomas Ingilby, we are hoping that Wellington will accept our invitation to the 2020 Golden Oldies Cricket Festival .