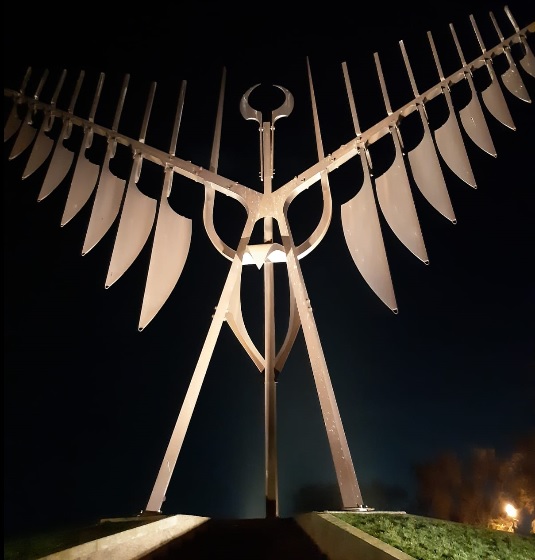 (The iconic, ‘Spirit Catcher’ providing a stunning image on the Barrie skyline.)

HIP Director, Mary Fennimore, recently managed to squeeze in a two day visit to Barrie while in Canada for a family  wedding, and hosted by the Deputy Mayor, Barry Ward, and his wife Marg . Barry and Marg were civic guests in Harrogate for the UCI World cycling last September.

They were given a tour of City Hall by Barry, and Bill Sergeant from Barrie’s International Relations Committee.

They were shown  Sir Robert Barrie memorabilia and paintings, and a wonderful photograph of the bay on the wall round the council chamber, as well as seeing the view from the top floor offices. Bill then took them to the art gallery, where they had a behind-the-scenes look at the latest exhibition which was being set up, and then on to the military museum.

Mary said that Barry and Marg were wonderful  hosts, introducing them to Barrie by night, and sampling the ‘brew’ from the ‘best pub in town’!

They also managed to fit in a trip north to Midland, to the annual First Light festival at ‘Saint Marie Among the Hurons’ (an early settler site), where the attractions included food, music, crafts, fireworks, musket firing, and a lesson in First Nation drumming (!).

Proving ‘it’s a small world’, they met someone who had lived in Shipley for several years, and another local who had been to the Harrogate riding centre!

Bill Sergeant and Bunty Brooks were presented with a gift for the Barrie International Committee, which was the new Harrogate Monopoly set! That went down really well!

The next event on the horizon with Barrie is the return visit of the St Edward’s choir, next July. Bunty  is particularly involved with that, and is very much looking forward to coming back to Harrogate, as we are to welcoming her!